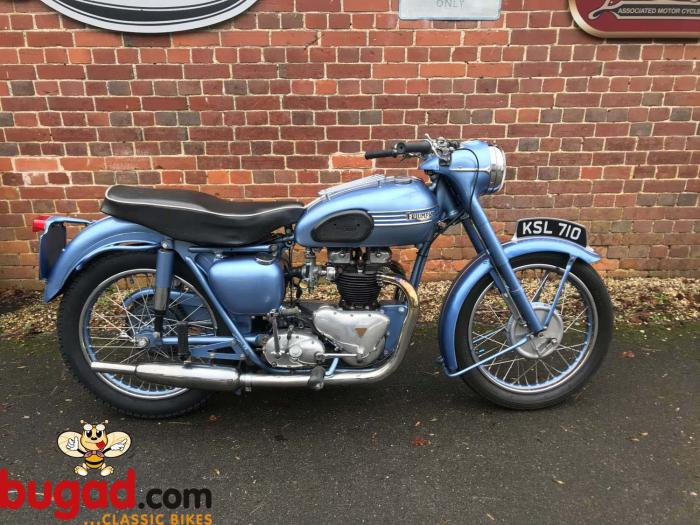 Triumph 6T 650cc For Sale Pre-unit 1955 Thunderbird
Great bike, lovely Blue colour, runs very sweet. We are very reluctant to sell this bike.
Without doubt one of the nicest Thunderbirds that we have had. In our opinion the best model to own as it has the alternator which was used on the last of the pre-unit models. By this time Triumph realised that the Lucas dynamo just wasn't up for the job, especially riding at night. This bike also has an electronic ignition fitted instead of the magneto. So with 12v and proper ignition it make the bike very enjoyable. The engine and gearbox are as sweet as can be, and it's a real pleasure to ride. Very easy to start as you would expect.

Sourced from the Internet somewhere:
The Triumph Thunderbird was named by Edward Turner, who had stayed at the Thunderbird Motel while traveling in the US. He liked the sound of it & so named his new 650cc twin after it. The T-Bird has an interesting history amoung Triumph Motorcycles. The name has been used 3 times, the first which we will delve into here, the 6T ran from 1950 through 1966. The name was revived again in 1981 for the TR65, an entry-level bike made by destroking the Triumph Bonneville 750. And lastly, it was revived again in 1994 by the new Hinkley-based Triumph Motorcycles as the Triumph Thunderbird 900 triple.

Another interesting aspect of Triumph Thunderbird history is that it started out its run in 1950 as THE hottest Triumph motorcycle you could buy, in fact, maybe the fastest bike, period. By the mid-1950s, with the introduction of the Triumph TR6, the T-Bird became the more staid, fuddy-duddy model instead of the grand tourer. They came with full fenders & a headlight nacelle. Some even had "bathtub" bodies. Compared with the lean-and-mean stripped-down Triumph TR6 & the new Triumph Bonneville, the Thunderbird looked downright droll.

It all started with the seminal 1937 Triumph Speed Twin, the first true vertical twin that all others copied. By the end of WWII, several others were building 500cc vertical twins. The answer: More Power! A steady diet of developmental tweaks took it about as far as it would go. So, in 1949 Edward Turner took the venerable 500 twin, bored & stroked it out to 650 & created the 1950 Triumph 6T Thunderbird 650. The die was cast & everyone else in the industry soon followed suit.

Part of the genius of the Triumph Thunderbird design was that it was really the same basic bike that they were already producing in their 500cc line (Triumph Speed Twin, Triumph Tiger & Triumph Trophy). The new 640 Thunderbird used the same basic engine castings, the same frame & running gear. A few styling & color changes differentiated the look, but otherwise, it was pure Triumph! While creating a whole new motorcycle in the eyes of the public, Edward Turner had really just rejumbled some parts on the bikes they were already building. Of course, this cut development time, money & risk. Just like the '37 Speed Twin had set the 500cc vertical twin mold as the standard in the industry for the next 14 years, the T-Bird recast it again as a 650 & soon the entire industry followed. Norton, BSA, Matchless & Royal Enfield all soon had their own 650 vertical twins.