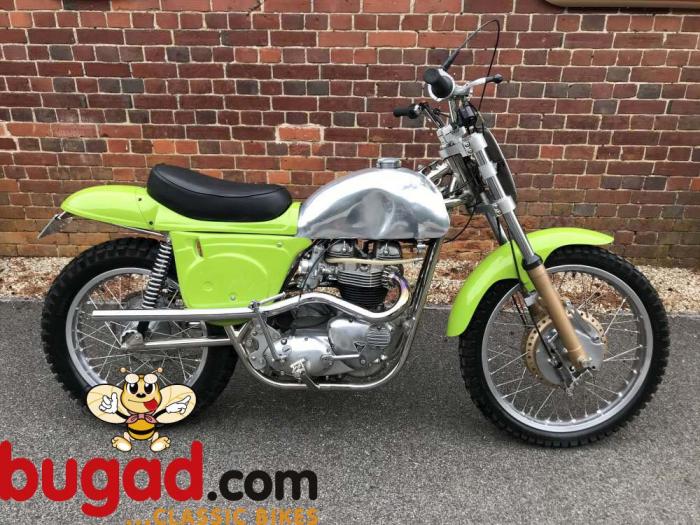 Rickman/Metisse For Sale - 1969 Reg - 650cc Triumph Trails Racer - Brand New!
This is a Brand New Motorcycle, the Triumph 650 Bonneville with twin carb head, unusual in this model. Very costly 4-leading-shoe front brake and forks. Alloy tank. The total cost of build exceeds the asking price. You couldn't build it cheaper. Done a couple hundred miles so the teething problems are fixed. Ready to go. Yes we know the colour is a bit odd, but it's only a paint job if you want to change it. Sounds lovely. Road registered and legal to ride. What you waiting for?

Copy from various sources online:
In 1959 British brothers Derek and Don Rickman, both successful motorcycle racers in “scrambles” (the forerunner to motocross), designed and built their own frame and suspension system to better adapt the then-ubiquitous Triumph and BSA mechanicals for off-road use.
Within just a few years, the Rickman ‘Metisse’ machines – French for ‘mongrel’ – were wildly popular in national-level competitions. The Mk3 of 1962 could be assembled at home using an engine and parts pirated from a wrecked road bike, yet it was still capable of snatching top-level victories from the fast-rising generation of lighter, two-stroke European bikes from the likes of Husqvarna and Maico.
The Metisse Mk3 found one high-profile customer in Steve McQueen. In 1966, the actor had his friend, Hollywood stuntman and fellow motorcycle racer Bud Ekins, build him a Mk3 with a tuned 650cc Triumph T6 twin for long-distance desert races. In the November 1966 issue of Popular Science magazine, McQueen would describe it as “the best handling bike I’ve ever owned” (though within a few more years he, too, would switch to lighter, two-stroke European bikes).