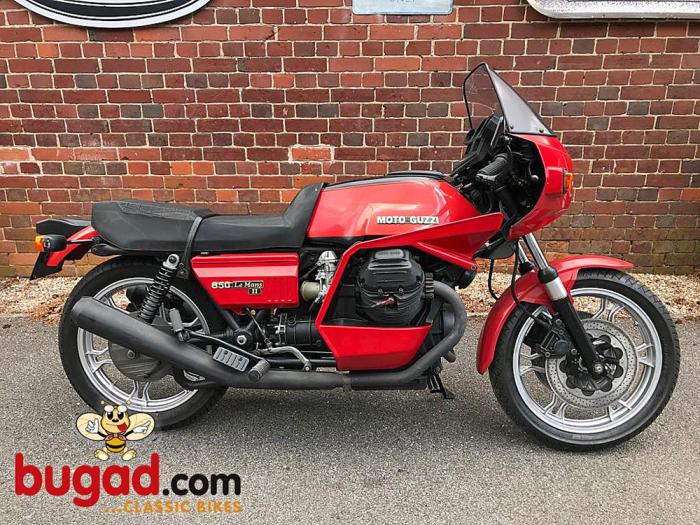 Moto Guzzi Le Mans 2 For Sale - 1981 Reg 850cc V Twin, Lovely Original
Great example of the early Guzzi twin, the Le Mans models are much sought after. These bikes were made for riding, not for poncing around town. The shaft drive makes it a low maintenance machine, so you don’t need to know much about fixing them. This example had the same owner for 38 years, much cared for and seems to be very original. We have fitted new brake discs, so she is ready for a new life with you.

Copy from online source:-
When Moto Guzzi introduced its first V-twin engine in the mid 1960s, it displaced 700 cc and was mounted in a shaft-drive model called the V7. The engine soon grew to 750 cc, and a performance-oriented model called the Sport followed.
Further enlargements to the V-twin in the mid 1970s increased displacement to 850 cc, and then to a full liter. Most of these engines were mounted in touring motorcycles, but in order to capture the attention of the enthusiast market, Moto Guzzi introduced the LeMans Mk I in 1976.
Like other Moto Guzzis of the period, the LeMans was built on a tubular frame, a section of which could be unbolted to allow for easy removal of the engine. It also had a linked braking system where the foot pedal controlled not only the rear disc, but also one of the twin front discs; the other was activated by the conventional hand-brake lever. Unique to the 1978 Moto Guzzi LeMans motorcycle was a bikini fairing, clip-on handlebars, and distinct badging and trim.