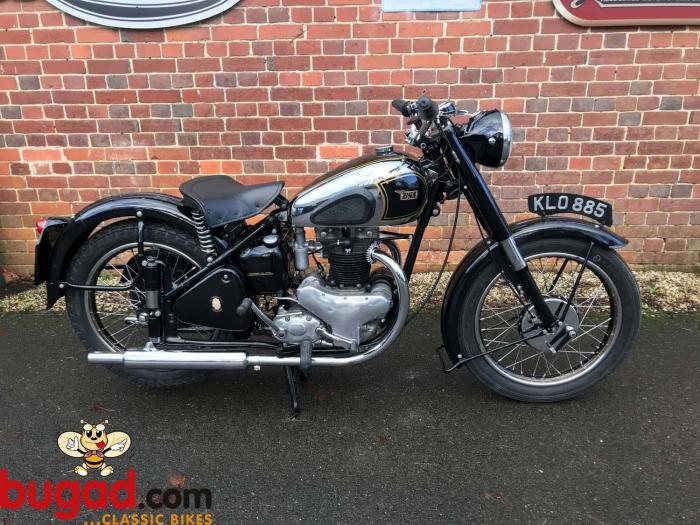 BSA A7 500cc For Sale - 1949 - Long Stroke - Plunger - Restored
The first twin that BSA made, this model, commonly known as the "long stroke" is the predecessor to the A7/A10 twins that we all know. It's not often that you see one of these, and rarely is it lovely like this one. Fully restored and not yet ridden on the road, you can ride it, or just store it in the lounge as an investment. Lots more money spent on it than the price you are paying for it, so you're already a winner!

From Motorcycleclassics.com:
In 1938, Edward Turner’s Triumph Speed Twin redefined the British motorcycle, and by the end of the 1940s every manufacturer had to have a parallel twin in their lineup. BSA and Norton responded with their own take on the format, but each adopted design approaches that were different from the other — and from Triumph.
1949 BSA A7 Twin
Claimed power: 26hp @ 6,000rpm
Top speed: 85mph
Engine: 495cc air-cooled OHV parallel twin, 62mm x 82mm bore and stroke, 6.6:1 compression ratio
Weight (dry): 365lb (166kg)
Fuel capacity/MPG: 4.5gal (17ltr)/45-55mpg
Price then: $675
BSA’s first parallel twin, the 500cc A7, was built from 1946-1950 and bears witness to several of Britain’s best motorcycle designers. Valentine Page is credited with the basic layout, and he had almost completed the design in 1939 before hostilities interrupted civilian bike development. Edward Turner of Triumph fame also worked on the BSA A7 project in the early 1940s before BSA’s Herbert Perkins completed the detail work.
The first production A7 engine also featured characteristics of Page’s 1935 Model 6/1, a 650cc parallel twin he designed for Triumph — the single camshaft mounted behind the cylinders, for example. (Turner’s Speed Twin used two camshafts.) But several of Turner’s styling hallmarks — like the separate rocker boxes with screw-on inspection caps — also endured.
The BSA A7 engine was built around a one-piece iron crankshaft with a bolt-on flywheel and steel connecting rods, the crank running on a ball bearing on the primary side and a steel-backed bronze bushing on the timing-side, through which oil was fed to the connecting rod big ends. The timing-side bush was the engine’s weak point, and a point of much criticism over the years, especially as it was carried over to BSA’s later twins, which produced more than twice the A7’s horsepower. Worn bushings were often blamed for lubrication failure and engine blow ups.
A train of three gears drove the single camshaft, which in turn spun the magneto, while the front-mounted 6-volt generator was driven by chain. The cylinder block and head were cast in iron with siamesed intake ports for a single Amal carburetor and splayed exhaust ports.
The long stroke (62mm x 82mm) engine produced a modest 26 horsepower at 6,000rpm. A BSA 4-speed gearbox was bolted to the rear of the engine in “semi-unit” construction instead of separately to the frame. This was carried over into the first generation 650cc A10 Golden Flash of 1950.
The A7 powertrain went into a conventional lug-and-braze mild steel tube frame, with a rigid rear and BSA’s own telescopic fork at the front, though the frame did make somewhat ingenious use of the seat tube. Inside the tube, at the bottom, was a serrated rod attached to a steel bar that served as the centerstand. The stand was deployed by a ratcheting handle on the seat tube, which cranked the stand down to the ground, locking it in place with a pawl. Most owners quickly removed these stands as they had a habit of self-deploying while underway!
Another clever feature was a quickly detachable rear wheel — useful in those dark days of frequent punctures — and BSA’s patented “crinkle” hub that allowed the use of straight spokes. This design stayed with BSA for another 24 years. Dry weight for the A7 was 365 pounds, about 10 pounds lighter than Triumph’s Speed Twin.