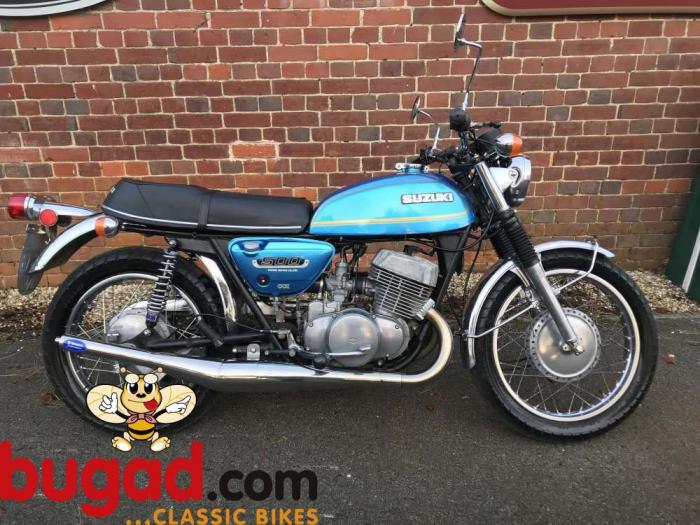 Suzuki T500 Titan For Sale - 1974 Reg - 500cc Two Stroke, Expansion Cans
Cracking two stroke 500 twin. If you like your Strokers then this is one to own. Goes well, sounds GREAT, and we have the original cans for it if you prefer to use them. The predecessor to the GT500 and with many of those qualities. Bloody great in a straight line but you have to be brave and a big pair to go round a roundabout with the taps on. So much character and fun.

Copy from Motorcycleclassics.com:
From the mid-Sixties to the mid-Seventies, 2-stroke motorcycles ruled the roost. Kings of the strip and the street, the young men who rode them put up with whisker-wide power bands and a massive thirst for gasoline to get that heart stopping power.
There were exceptions, however, and the exceptions to the wild Sixties 2-strokes were built by Suzuki. While other manufacturers promoted 12-second drag strip times, Suzuki focused on building reliable, user-friendly motorcycles like the Suzuki T500 Titan. Other 2-strokes screamed: Suzukis were quiet, designed for people who wanted to tour or commute, not race.
Interestingly, the technology Suzuki used to excel on the street may have come from the race track. In the early Sixties, Suzuki wanted to win races, both for the marketing advantage victory brings and to score points over rival Honda. In 1961, Suzuki made contact with Ernst Degner, a top rider and engineer with the East German MZ team. East Germany was then firmly under the heel of the Soviets, and Degner, eager to direct his destiny, seized the opportunity to get out. By the fall of 1961, Degner had made it past the Iron Curtain and was working for Suzuki.
Using the knowledge he gained working at MZ with 2-stroke guru Walter Kaaden, Degner taught Suzuki how to get real power and speed from its own 2-strokes. This knowledge was more than certainly used to improve the road machines as well as to win races, as Suzuki soon became known for its reliable and powerful 2-stroke singles and twins.
Bringing out the big guns
Late 1965, saw the introduction of the Suzuki T20, also known as the Suzuki X6 Hustler. Its 2-cylinder, 247cc engine had a bore and stroke of 54mm x 54mm, a 7.3:1 compression ratio and produced a claimed 29hp @ 7,500rpm. Pump lubrication oiled the lower end, and a six-speed gearbox transferred power to the rear wheel. Press tests confirmed the twin was good for 90mph.
A year and a half later, Suzuki took another step up and introduced a 493cc twin developed from the T20, the Suzuki T500 /Five. Honda had recently introduced the 4-stroke Honda CB450 Black Bomber, upsetting the assumption within British, European and American motorcycle circles that the Japanese were not interested in building larger capacity motorcycles. The Suzuki T500 /Five was in its own way just as revolutionary: it invalidated the belief that a large capacity 2-stroke would overheat.
The T500 /Five (500cc and five speeds), also known as the Suzuki Titan, was bombproof. Not only did it run flawlessly when contemporary magazine testers took it through Death Valley in the summertime heat, it soon gained a reputation as one of the most reliable motorcycles of the Sixties. Even so, it attracted much less attention than the Bomber, which must have irked Suzuki executives to no end. The Suzuki T500 has been called one of the most underrated motorcycles of all time.
Engine dimensions were over-square at 70mm x 64mm, similar to Suzuki’s 250 singles, and the compression ratio was 6.6:1. Cylinders were aluminum alloy sleeved with iron. The lower end had three main bearings, pump fed lubrication to the lower end of the rods and the rear of the cylinders, and alternator ignition timed by points. A 5-speed gearbox (often criticized for a “safety feature” that wouldn’t allow second to first gear shifts while on the move) transferred power to the chain final drive. The tachometer drive was taken off the countershaft, which meant the tach wouldn’t read when the clutch was disengaged.
The engine was carried in a dual-downtube steel cradle frame with wire wheels and drum brakes. Shortly after the 1968 introduction of the 500, Suzuki lengthened the swing arm just over half an inch (from 52.7 inches to 57.3 inches) to improve stability. The bike, now called the T500 Cobra, quickly gained a reputation for good handling, nicely aided by its engine’s wide power band. In 1969, the 500 was restyled and carburetor size reduced to 32mm from 34mm. “The smaller carburetors didn’t affect performance,” says Tony Silveira, owner of our feature bike. “But it really helped the gas mileage. I get 50mpg, no joke.”
Other changes included the cylinder barrels, which now had 11 fins instead of 10, new pistons and better porting. After some piston failures (most notoriously in the 1970 Cycle Big 7 Superbike Comparison), the Titan, as it was now called, was built with the stronger pistons from the water-cooled Suzuki GT750.
Cycle’s piston failure came after repeated drag strip runs. Before its engine failed, the Suzuki was basically tied with a Sportster for third best brakes in the seven bike test, and it had scored points for its light weight and bargain price. Yet it didn’t accelerate or do laps as fast as its competitors, and was, editor Cook Neilson opined, a bike “we felt might be in over its head. We were right.” Perhaps, but as the only 500 in a field of 750s one could argue the Suzuki actually acquitted itself quite well.
The world was changing, and so were Titans. After 1972, they were upstaged by the 3-cylinder, water-cooled GT750. The 1973 T500K and T500L Titans had a larger gearbox oil reservoir and a strengthened bottom end. In 1976 the bike was renamed the GT500 and given a bigger tank (4.5 gallons versus 3.7), electronic ignition and — finally — a front disc brake.
By this time, 2-stroke street bikes were reaching the end of their road. It wasn’t cost effective to clean up the emissions of even the relatively clean-running Suzuki 2-strokes, so Suzuki focused their efforts on 4-stroke engines. After an aborted (and expensive) fling with the 1975-1976 RE5 Rotary, Suzuki rolled out the Suzuki GS750 4-stroke for 1977. The last Titans were built in 1976 and offered for the 1977 year.