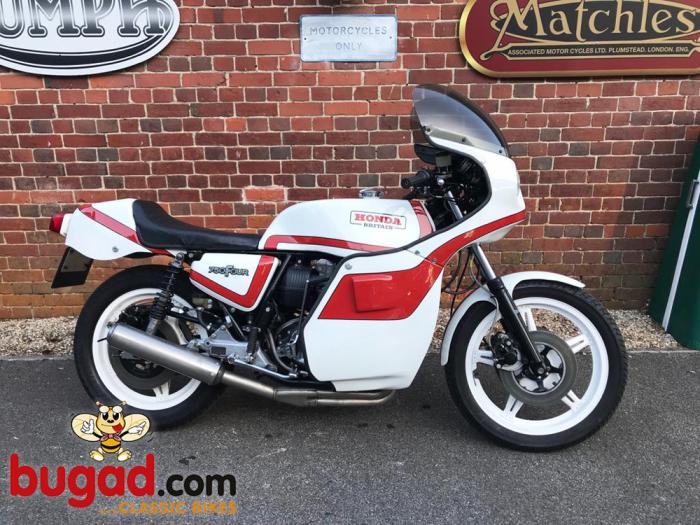 Honda CB750 Britain - 1979 Reg - 750cc Original Britain, Rare Beast, 1 of only 250
Engine rebuilt completely, done 100miles, fantastic condition. Not often you see one of these models available. What a piece of history. The CB750 was an icon of it's own, and dressed up like this it becomes a museum quality piece. A lovely bike.

Copy from online sources:-
Owning such a machine is the opportunity to own an extremely rare piece of motorcycling history. In 1976, Honda introduced the 73 BHP CB750F2. Apart from being the hottest summer on record, it was also a time when every Englishman was ripping off his air filter, throwing away factory exhausts and replacing them with four into one systems and fitting ace bars. If one of these fellows was brave enough, and truly wily, to be king of the road he’d also have had rear sets on his bike. If he were truly a one in a million gentleman, a real rebel of the two lane black top who might well get his knee down, he would have a race seat and maybe a true king would have a fairing too. Perhaps a one third fairing in a different colour to his fire breathing motorcycle.
One thing was clear in the 1970s, with all this customising. No Japanese factory was going to deliver a motorcycle with ace bars, rear sets, fire-breathing exhaust, racing saddle, alloy works petrol tank and a full fairing all colour matched too! Whatever next? Colour-matched leathers???!!!!
So, in 1977, when Phil Read rode an 820cc Honda CB750F2 to victory at the TT Formula one, Honda Britain saw an opportunity. They also saw what the future may hold. They had been begging the factory to build race replica motorcycles direct from the factory, but the Japanese company was too conservative. So to celebrate the racing victory, and to tap into the Englishman’s need to make his road bike more like a race bike, Honda Britain commissioned Colin Seeley to build 150 of the CB750F2 Phil Read Replica. This was the first ever fully faired race replica motorcycle, available straight from the showroom from any Japanese motorcycle importer in the world.
Not to be confused with the Seeley-Honda, which used a Seeley frame, the Phil Read Replica relied on special bodywork finished in ‘Honda Britain’ livery to set it apart from the standard production model. After the initial batch of ‘Phil Read’-badged bikes had been built, a further 250 of the succeeding ‘Honda Britain’ models was completed.