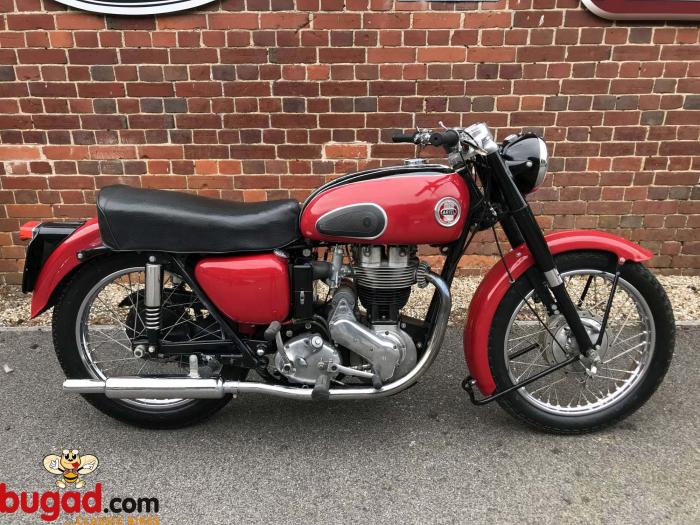 Single cylinder 350cc, Red, single port.
This example starts very easily, runs well and will do exactly what it says on the tin.
The Ariel 350 is a solid bike, they will never burn rubber, and you'll need a shave when you get to where you're going, but they a very easy to ride, and a superb classic bike to own, as maintenance is very basic. Starting and stopping are easy to do, in fact this bike has a Twin Leading Shoe front brake, which is something we have never seen on this model.

Interesting notes from the internet:


The Red Hunter name dates back to the Great Depression, and two of the great names in British motorcycle development are responsible. The first was Val Page, a brilliant engineer working for Ariel who developed a beefy 500 single back in 1926. It was so reliable that in 1929 two Brits put an Ariel with that engine between two 18-foot pontoons, rigged a drive to a propeller and rode across the English Channel to France. Good publicity.
Then a fellow named Edward Turner came to work at Ariel and designed the first Square Four, which appeared at the annual Olympia Show in late 1930. Soon he was in charge of developing new product, and elected to put a tuned version of Page’s 500 single in a model called the Red Hunter, which appeared late in 1932. Turner understood that styling sold, and these were nicely prepared, with lots of nickel-plate sparkle and a glossy red paint, the sort of bike the sporting Englishman might hope to own. It was a success, and with that success Ariel bought the Triumph company, and Edward Turner went to work there, and become famous. While Val Page moved on to the BSA company.